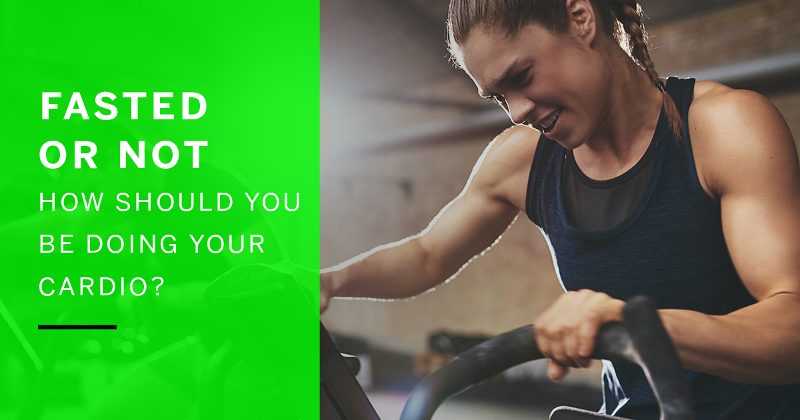 Fasted or Not: How Should You Be Doing Your Cardio?

It is getting to that time of year where you must start considering how to undo the bad deeds you have performed in the order of the beverages and food you have consumed. The holidays are a challenge as cookies appear from nowhere, party invitations arrive and then you have the gatherings with family and food (…and more food). This is why for so many people at the turn on the year, resolutions are made and goals are set. A common New Year’s goal is to start exercising, to lost weight and get back in shape.

Whether you have made a New Year’s resolution or not, losing weight and burning fat is a common goal for both men and women. A common strategy that is employed by so many people is to perform more exercise, especially aerobic-style (aka, “cardio”) exercise. An extension of performing cardio, many people will perform their cardio first thing in the morning without eating anything. Completing cardio in a fasted state is thought to accelerate the loss of body fat. In theory, not eating before morning cardio results in a scenario where the body has not received any fuel in the past 8 – 10 hours, depending on how much sleep and how long it was since last ate. As a result, liver glycogen stores will be reduced along with blood levels of insulin which subsequently will shift the body towards burning more fat (versus carbohydrate) to produce the energy needed to complete the exercise.

The bottom line is simply, “Does this strategy work?” Several short-term studies demonstrated when exercise is completed in a fed state, the amount of fat that enters parts of the cell where it can be broken down in reduced (Ahlborg and Felig 1976, Horowitz, Mora-Rodriguez et al. 1997, Civitarese, Hesselink et al. 2005). Collectively, authors of this work indicate this happens due to a reduction in fat breakdown (due to higher insulin levels), an increase in the metabolism of carbohydrate and a decrease in the expression of genes involved in breaking down and transporting fat molecules throughout the cell (Coyle, Jeukendrup et al. 1997, Horowitz, Mora-Rodriguez et al. 1999, Civitarese, Hesselink et al. 2005). Additionally, another study required consistent exercise over a 6 week period while fasted and found that changes deep inside the muscle (at the molecular level) occur that are favorable to fat oxidation (De Bock, Derave et al. 2008).

Unfortunately, the majority of these studies were performed in laboratory animals and no study has been performed when the study subjects (animals or people) were also following a restricted caloric diet. To examine the combination of exercise while fasted or not and consuming a restricted calorie diet, a study published in the Journal of the International Society of Sports Nutrition in 2014 was completed (Schoenfeld, Aragon et al. 2014). The authors required 20 healthy young female (22.4 ± 2.8 years, 62.2 ± 6.5 kgs) to follow a prescribed diet and exercise program. Estimations of how many calories were needed were first completed and then this total figure was reduced by 500 calories. Protein intake was held constant at 1.8 g/kg/day. Each person was then randomized to complete a 3 day per week treadmill-based exercise program. Each exercise bout spanned 1 hour and consisted of a 5-minute warm-up at 50% maximum heart rate, 50 minutes at 70% maximum heart rate and a 5-minute cool-down at 50% maximum heart rate. All exercise was supervised by trained research assistants.

Several important messages came from the results of this study. First, consistency with your exercise program is king and trumps all other considerations when it comes to improving your fitness and losing fat. You have to put in the work and do so consistently. So don’t be a binge exerciser or an uninspired two to three day per week person and then mope around and say you have tried the exercise thing. These people exercised three days per week for an hour and each group, whether they fasted or not, lost significant amounts of body weight and body fat percentage. No difference in weight loss or fat loss was found between the groups, but again that doesn’t mean the strategy should not be employed. For starters, the study was only four weeks and that authors conceded this point. In just four weeks, the group that fasted did lose 2x the percentage of body fat as the group that was fed. In four weeks, the group that fasted lost 1.6 kilograms of weight while the fed group lost 1.0 kilogram.

As a result, if these results continued both groups would have lost impressive amounts of weight and fat and maybe the changes between both groups would be different, but maybe not. We only know for certain until someone does a longer study. The bottom line is simple: modest caloric restriction combined with three hours of exercise each week resulted in significant amount of weight loss and fat loss. If you like fasting before cardio, feel free to do so. It certainly won’t decrease the results you achieve, but if you think it is going to put you on a one-way track to being a magazine cover model that isn’t realistic either.