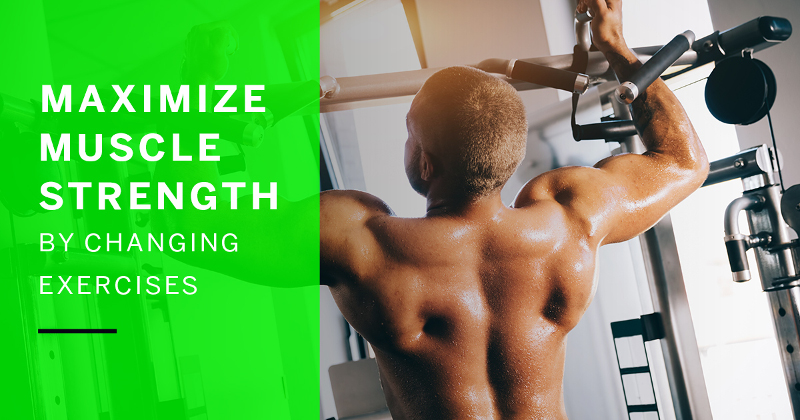 Exercise science purists and academics who teach in Exercise Science programs like what we have at Lindenwood University teach key principles such as overload, specificity, reversibility, progression and others. An extension of the progression principle says that to optimize positive adaptations to your exercise program, you must progress something: commonly the load, volume (sets x reps) and exercises you choose are all things that are switched or progressed. How many of you have yourself switched up your exercises just because it was time or advised a friend or client to do the same? Nearly everyone does and if they are not, they should be! A research study was just published examining the impact of switching up exercises and intensity.

I get excited by this type of research! It is exciting because it is extremely practical and answers a question or provides information about something nearly all of us do (or should do) and routinely talk about when discussing your workout program. In the November 2014 issue of Journal of Strength and Conditioning Research, a study was published that compared the strength and muscle hypertrophy changes after 12 weeks of resistance training (1). The unique aspect was one group made no changes to the intensity or exercises they completed the entire time (sounds like an exciting program, doesn’t it?), another group did not change the intensity but switched up their exercises, another group switched their intensity but not change exercises and finally a fourth group switched up both their intensity and the exercises that were performed. A 5th group was a control group and did nothing except come in to the lab and complete the same tests at the same time as other participants.

Because this was a research study many things had to be controlled. As an example (and an excellent one!), the volume was controlled in all groups which means that every single person who exercised completed the exact same number of repetitions. Also, all study participants only resistance trained their lower body and completed varying numbers of sets and reps (depending on what group they were assigned) of the squat, leg press, deadlift, and lunge exercises. Certainly, many of you may feel the program lacked some key exercises, but one must consider the job of the researchers and in this situation they did an excellent job with controlling key factors while choosing exercises that were relevant to most athletes who resistance train.

What did they find? First, they found that all groups experienced significant increases in muscle hypertrophy in both legs that were trained (except for the control group that did nothing). Most importantly, all groups experienced similar increases in muscle size (9.3 – 12.2%). These data are awesome because it gives us valuable perspective on a few key things. First, doing nothing does nothing to improve muscle hypertrophy. Duh! Yes, but this just goes to show you that you have to do the work, you can’t just talk about it and expect growth to happen. Also, it is valuable to know that similar increases in hypertrophy occurred no matter how people trained. Thus, if you have a routine and you don’t want to mess it, don’t! If you like trying other exercises and the challenge of switching things up, knock yourself out.

Changes in strength, however, were different and more in line with what we might expect. Again, all groups experienced a significant increase in one-repetition maximum using the squat exercise when compared to the control group, who again experienced no change. The group who switched up their exercises but trained at the same relative intensity experienced the largest increases in maximum strength when compared to all other groups.

Some may be frustrated because the message from this study seems to be different for muscle hypertrophy and muscle size, but don’t be. You can’t lose sight of the fact that all styles of training led to similar increases in growth. That makes it easy as you just need to get in there and train. Of course, other factors such as their diet, supplementation, genetic predisposition and how many weeks someone trains (this study lasted 12 weeks) will also impact hypertrophy to some degree. Also, sizable improvements in strength occurred in all groups with most groups increasing lower-body strength by 20 – 40%, so again, the training process overall is pretty effective. It does, however, seem that switching exercises is a powerful stimulus to maximize increases in strength and over time greater strength may translate to greater overload and subsequently more growth, but that is beyond the scope of this paper.